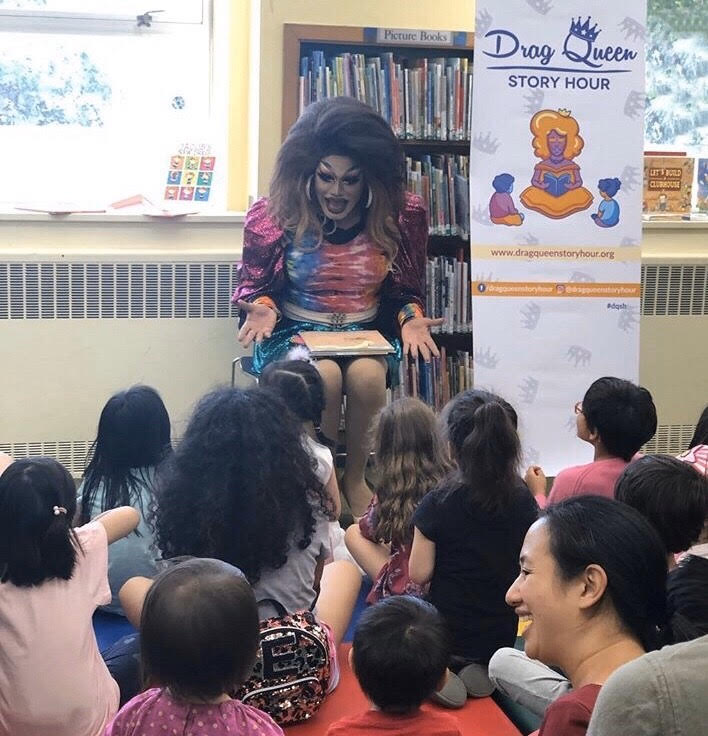 Some drag queens around the United States are taking to a different kind of stage: one at the front of a public library.

The Drag Queen Story Hour, which started in 2015 in San Francisco, are events which see drag queens reading stories to children in libraries, bookstores and schools. The storytellers dress in exotic and beautiful outfits and wear flamboyant makeup while reading stories often focused on gender identity issues and same-sex relationships to curious young listeners. Their aim is to encourage children to be open about how they might want to dress and express themselves, while teaching them valuable lessons on acceptance and appreciation of human diversity.

Judy Zuckerman, director of Youth and Family Services at the Brooklyn Public Library, says that the Drag Queen Story Hour celebrates fluidity, fun and diversity in the way that children may dress and act.

However, some do not see the story hour as educational or appropriate for the youngsters. Events, especially in smaller towns, are often interrupted by protesters. Ben Baker, a Republican state representative in Missouri, filed the Parental Oversight of Public Libraries bill in response to the story hour. This bill would require libraries to create parental review boards in order to censor material deemed inappropriate for children, according to the Jefferson City News Tribune.

Drag queen Autumn Equinox read a story to children attending a rally against the Missouri bill and said, “Kids need to be given the opportunity to see what it’s like outside of the binaries of gender and outside of the concepts that have been forced on us.”

The Drag Queen Story Hour also attempts to help children that have been or are being bullied, since they also discuss issues like anti-bullying and self-love. “There is no hidden agenda or meaning behind it,” said Melissa Bean, the founder of the Middle Tennessee chapter of Drag Queen Story Hour, to the New York Times. “We are not trying to breed drag kids.”

Diversity: Diversity means differences; people may be different in many ways, including race, ethnicity, sexual orientation, disabilities, culture, appearance, or religion
Censor: When an official takes out things from art and books etc. considered offensive or immoral
(Gender) Binary: A way of seeing gender as two distinct and opposite groups—girl and boy. This idea doesn’t include all the ways we can have a gender identity and express our gender.