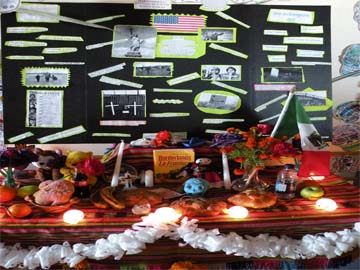 Students at Hollenbeck Middle School in East Los Angeles, California, honored the dead by creating altars on Día de los Muertos. The Day of the Dead is traditionally celebrated in Mexico and Latin America on November 1st and 2nd. This particular altar honors immigrants who have died and those who will die while crossing the U.S.-Mexico border in the hopes of having a better life in the United States.

See if you can find the traditional items on the altar:

See if you can find additional items that specifically represent their topic: