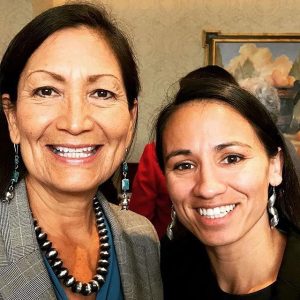 Debra Haaland ran for Congress representing New Mexico and is a member of the Laguna Pueblo tribe. She was inspired to do so by her hard-working and dedicated grandmother. Her grandmother sparked a light in Haaland and made her start a career as an activist. Haaland has been a longtime volunteer for the Democratic Party working hard to get out the vote. Haaland is also passionate about protecting the environment, which is why she resisted the crude oil pipeline at Standing Rock. However, this road has been a rocky one for Haaland. She has faced economic hardship as a single mom, which is why, as a politician, Haaland is making sure that all people get what they need. “It starts with putting people before profit,” she says. She’s also driven to inspire young girls and make sure that they have a role model.

Sharice Davids is a Native American woman from the Ho-Chunk Nation and former mixed martial arts fighter, who, after the 2016 elections, decided to stand up for the people in Kansas, who she felt were being ignored in Congress.

Before running for Congress, Sharice Davids worked at Pine Ridge Indian Reservation for five years. Davids is also an LGBTQ activist and the second openly lesbian woman in Congress.  After her win, the internet exploded with articles celebrating her being one of the first Native American women in Congress. As journalist Mark Anthony Rolo, who is member of the Bad River Band of Ojibwe in northern Wisconsin, put it, “Our voices are finally being heard.” But it hasn’t all been easy for Davids. During her campaign, she faced intense criticism from the man she out-seated, Republican Kevin Yoder.