Death of a Star 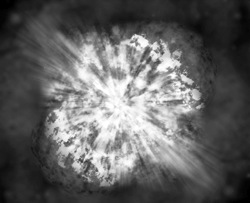 This is an artist’s rendering of what a supernova looks like in space. -NASA Illustration

Last month, scientists saw an explosion in the sky — the biggest supernova anyone has ever seen. A supernova occurs when a star runs out of fuel, collapses, and then explodes. If a supernova is close enough, you’ll see a star that is bigger and brighter than every other star in the night sky.

You won’t be able to see this supernova without a high-powered telescope, because it is in a galaxy 240 million light years away. But before it exploded, the star, called “2006gy,” was the size of about 150 of our own suns put together, and the scientists believe its supernova is 100 times more energy-producing than most. Astronomer Alex Filippenko said, “Of all exploding stars ever observed, this was the king.”

Scientists think that they’ll learn a lot from observing this supernova, like how stars die and maybe even how the universe was created, since many of the first stars were probably as big as this one and died like this one.

A star called “Eta Carinae” in our own galaxy, the Milky Way, may become a supernova before long. Since it is close, if it becomes a supernova it “could be the best starshow in the history of modern civilization,” says astronomer Mario Livio. You would be able to see it during the day, and at night it would be so bright that you could read a book outside!

For now, though, scientists are using their telescopes to enjoy the show and learn from the faraway star.