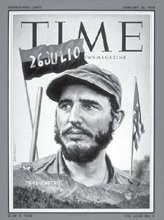 The year 2009 marks the 50th anniversary of the Cuban revolution. On January 1, 1959, Fidel Castro, Che Guevara and other Cuban revolutionaries overthrew the U.S.-backed dictatorship of Fulgencio Batista. They kicked out foreign companies that were taking advantage of the Cuban people and established healthcare and education for all Cubans.