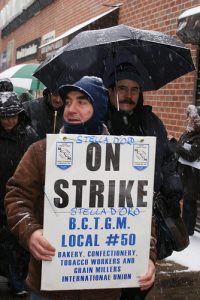 There was good news and bad news this summer for the 135 workers at the Stella D’oro cookie company based in New York City. A year ago the company owners said the company was losing money and had to cut the workers’ wages by 20 percent and end benefits such as sick days. The workers, through their union, went on strike because they refused to accept these conditions. In July, the government’s National Labor Relations Board (NLRB) ruled in the union’s favor and ordered the striking workers be brought back to work and given back pay.

The Stella D’oro company now says that it will close the factory in October. Stella D’oro workers are trying to gain support from city officials, and investors put pressure on the owners not to close the plant. The union’s lawyer, Louie Nikolaidis, says the union will appeal to the NLRB. “They can’t say they want to produce somewhere else to avoid having to deal with [the union].”