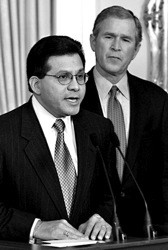 Leaders in Congress insist that senior Bush officials testify under oath in front of Congress. The White House doesn’t want them to testify and might try to prevent them from doing so. A constitutional conflict may arise if the president refuses to let his senior aides testify.

Attorney General Gonzales has also been criticized for defending the president’s illegal spying on U.S. citizens and for approving U.S. soldiers’ use of torture against prisoners in Iraq. Gonzales is scheduled to testify to Congress in April about the U.S. attorney firings. Many members of Congress including Democrats and some Republicans want Gonzales to resign. But President Bush says he still has confidence in Gonzales.