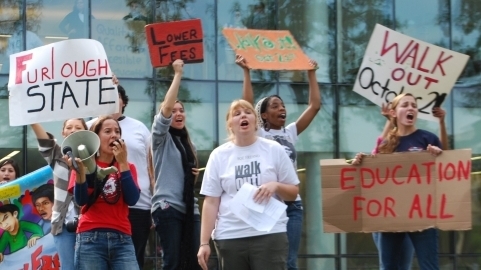 Thousands of students, teachers and workers across California joined together in the last months of 2009 to protest tuition increases and job cuts at the University of California (U.C.) system.  Tuition (the price for classes) will go up 32 percent, bringing it to $10,000 per year. There will also be cuts to teacher and staff positions. Many students will have difficulty paying for a quality education.  Until the late 1960s, tuition was free for residents of California.

The U.C. Board of Regents says the cuts are needed because of less money coming from the state of California. Many students and workers’ unions point out that the U.C. in fact has plenty of money, but puts it in bad investments, sports and huge salaries for “star” faculty and administrators. “They had a record year in their research grants. They had a record year in medical profits,” said Bob Samuels, president of the U.C. American Federation of Teachers, on the Democracy Now news program.

Students have led rallies, teach-ins and campus building occupations at six schools to protest the cuts.  Library “study-ins” to protest cuts in library hours, with students chanting “Whose university? OUR university! Whose books? OUR books!” have succeeded in keeping some libraries open.

The U.C. is investigating reports of police brutality against protesters. Rally organizers say police, often in full riot gear, hit protesters and fired rubber bullets. Dozens of protesters have been arrested, but most were released rapidly.  Students as far away as Austria have rallied in support of the students.