Yup’ik Students Tell How They Are Affected by Global Warming

Climate change is having a very real effect on the lives of these students and all of the approximately 400 residents of this western Alaska fishing village.

The residents of “Kwig,” a Yup’ik (indigenous Alaskan) village, depend on fishing, hunting and selling crafts to survive, much as they have done for centuries.
However, our warming earth is now threatening that culture.

The biggest challenge faced by the residents of Kwig is the melting of the permafrost, a layer of frozen ground that lies just below the earth’s surface and that is supposed to stay frozen yearround. Recently, that permafrost has begun to melt, and as a result, major changes are taking place. Many homes and other structures in the village are beginning to sink, leaning to one side as the permafrost they were built upon begins to shift.

In addition to the sinking homes, new, invasive species of plants are beginning to take root and grow, which in turn is slowly changing the migratory patterns of big animals such as the musk ox.

Fishing, too, has been affected by the warming trend, and fisherfolk have had to relocate due to the changing location of the fish.

These are big changes that can be seen, felt and experienced daily in the lives of Kwig’s students.

[Click here to see a map showing the location of Kwigillingok, AK.]

***
Kira, Adrianna and Corey are three Kwig High School students who took these pictures to show how their home is changing.

Kira: “This building used to be level, but due to the permafrost melting it has become slanted. We’re seeing our homeland change.” 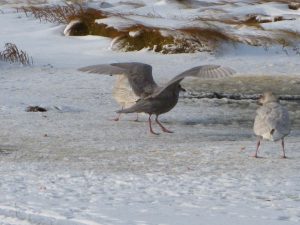 Adrianna: “I took the pictures of the seagulls because when things actually freeze up for the winter, the seagulls will have all left and it’s unusual for them to still be here, which suggests it’s not as cold as it looks.”

Corey: “If we don’t do something, we could lose this beautiful land that we have lived in for thousands of years, forever. We don’t have a lot of money. We need to stay near the ocean so we can fish. We don’t want to move farther back each year. We can’t leave, but we can’t stay either. What you do down where you live has a direct impact on us up here. Please let everyone understand that we’re all in this together.”

[[Click here to view a short video about climate change in Kwig.]]