Climate Change: Earth's Fate is In Our Hands 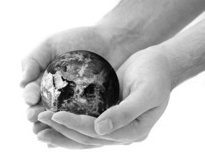 It may seem hard to believe, but people can actually change the weather and the earth’s climate. The Intergovernmental Panel on Climate Change, a group made up of scientists and officials from 113 countries, released a new report on February 2. The report stated that it is “very likely” (or 90 percent certain) that climate change is caused by human activity.

Climate change is a very important and controversial issue. The biggest polluters in the world are industries that make a lot of money, and there is a possibility that the Bush administration has tried to hide evidence of global warming to protect these industries. The U.S. House of Representatives held hearings in late January to investigate this accusation.

The Union of Concerned Scientists testified that almost half of the government climate scientists surveyed said that they had been told by the government to delete references to “global warming” and “climate change” in their reports.

One scientist who testified, Dr. Drew Shindell of the National Aeronautics and Space Administration (NASA), described how a report of his research on Antarctica was delayed and changed. He said, “It is a disservice to the public to distort or suppress the information needed for decision-making.”

Every time we drive a car, fly somewhere in an airplane, watch TV or turn on a light, we use energy. This energy mainly comes from the burning of fossil fuels such as coal and oil. When these gases are burned, “greenhouse gases” are released into the atmosphere. This causes the earth to slowly warm up. Rising temperatures cause hurricanes, droughts, heat waves and floods. Our society can work to develop safer forms of energy and transportation that will make our planet healthier.