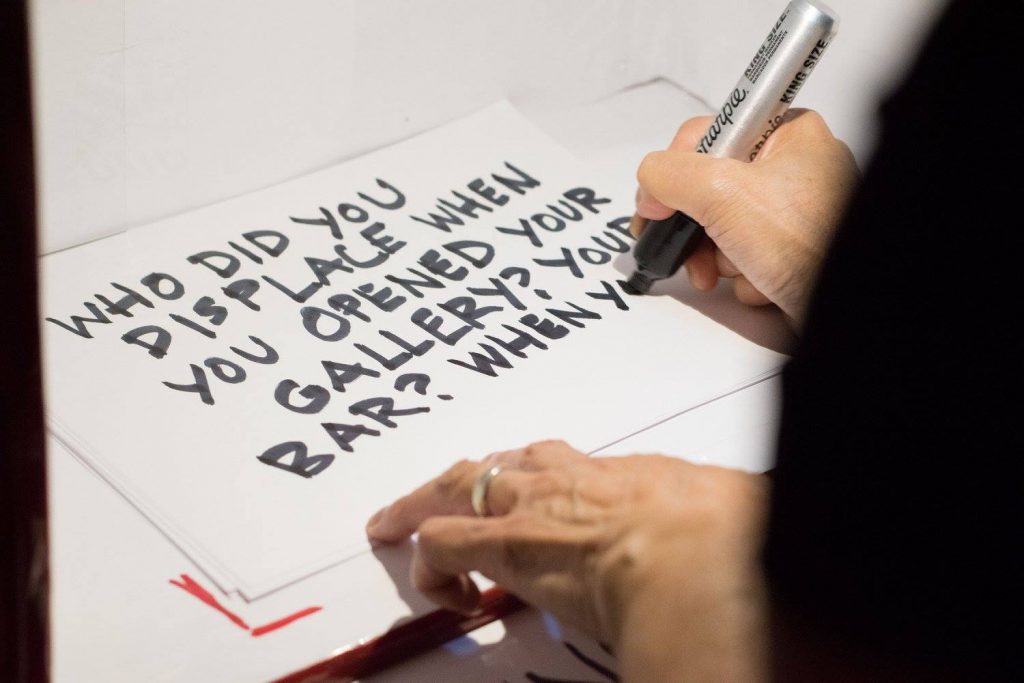 COURTESY CHINATOWN ART BRIGADE \ PHOTO BY KAHEAN CHANG
Participants’ statements against gentrification were projected across a building as a part of Chinatown Art Brigade’s Here to Stay event.

The Omer Fast exhibit at the James Cohan Gallery in New York’s Chinatown in September and October last year was met with outrage and protest from the community.  Fast, who came to the United States as an immigrant in his teens, said in an artist statement, “I wanted to erase the passage of time and to recreate what the space looked like before the gallery moved in almost two years ago.”

However, his exhibit was an offensive portrayal of a neglected storefront with Chinese paper lanterns, a display case with cheap cell phone cases, Chinese menus, broken ATMs, and plastic bags hanging on door handles. It looked nothing like the HK Manpolo Market that used to occupy the space.  The Chinatown Art Brigade (CAB), said in a statement, “The faceless immigrants the artist claims to identify with, who live and work in the neighborhood, are actually families and residents who are deeply offended by this depiction of the community as derelict and foreign.”

In protest, activists held up signs written in Mandarin, English, and Spanish that said, “Racist Art Has No Business Here,” “Racism Disguised as Art” and “Displace Racist Art! Not Chinatown Tenants!”

For the community, the exhibit also felt like it was adding insult to injury.  More than 130 galleries have opened in Chinatown in the last decade, replacing small businesses that have served the community for generations.  According to CAB, “These spaces are often the Trojan horses needed to raise the value of property and neighborhood. With over 80% of the people in Chinatown renting, not owning, their apartments, the rise of luxury housing and galleries is fueling a housing crisis in the neighborhood.”

Derelict: Broken down or poorly maintained.