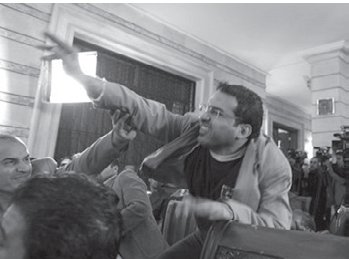 Iraqi journalist Muntazar al-Zaidi threw his shoes at President Bush in outrage over the U.S. occupation.

While former President George Bush was speaking at a news conference in Baghdad, Iraq, on December 14, an Iraqi journalist, Muntazar al-Zaidi, threw his shoes at Bush.

“This is a farewell kiss, you dog!” he shouted. “This is from the widows, orphans and those who were killed in Iraq.” Bush ducked and was not hit by the shoes.

In the Arab world, throwing a shoe at someone is a grave insult. The foot is considered impure, and shoes are thought to be dirty. Muslims customarily take off their shoes before entering a mosque to pray.

Al-Zaidi has since become famous and admired throughout the Arab world for his action. The Times Online reported that al-Zaidi’s brother, Maithm al-Zaidi, said, “Whenever I travel on public transport I am hugged and kissed by strangers because I look like my brother.”

The day after Muntazar al-Zaidi’s arrest, thousands protested to demand his release. Another of his brothers, Uday al-Zaidi, said that Muntazar al-Zaidi had been tortured while held in detention. He described his brother as having a missing tooth and cigarette burns on his face. Al-Zaidi is still being held in jail and faces a penalty of up to 15 years in prison for assaulting a head of state visiting Iraq.

“But after years of intimidation, mistreatment and unsolved killings at the hands of US soldiers, it is no surprise that there is anger and resentment among journalists.”