Boy Stands By Mom As She Defies Deportation 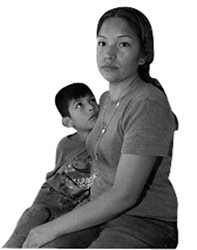 SAUL ARELLANO IS a 2nd-grader who often appears at press conferences with his mother. Saul’s mother, Elvira, is a Mexican immigrant who has been ordered deported* because she does not have proper documents to be in the U.S. She has been living at a church in Chicago since mid-August to avoid deportation. Elvira is an activist who has long worked to defend immigrant rights.

Leaders in Congress say they want to pass immigration reforms into law, including more fences and armed guards at the U.S.-Mexico border to try to keep people from crossing from Mexico. Pro-immigrant demonstrations have so far largely prevented the toughest immigration measures.

“Children can support immigrants by going to demonstrations and by giving testimonials about what it is like to live when your parents are undocumented,” said Eduardo of Centro Hispano Cuzcatlan, based in Queens, NY.

This is just what Saul is doing. In September he flew to Los Angeles to speak at the National Latino Congress about his family’s experiences.

*DEPORTED: When the government forces someone to leave the country.