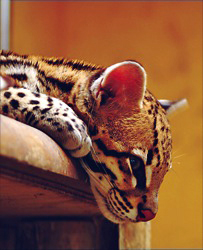 The ocelot is a wild cat whose numbers may decrease if the construction of the United States-Mexico border fence continues. Photo: Jonathan Jones

The ocelots, jaguars and jaguarundis that reside in areas on both sides of the fence have always had the ability to breed with each other, but once the fence is up the animals will be separated.

Scientists fear that if the ocelots, jaguars and jaguarundis from Mexico do not breed with their United States counterparts, such animals may become extinct. Another fear is that these animals and others will be cut off from the Rio Grande River, a major water supply, which may also lead to animal death and extinction.

Wildlife protective agencies and activists are fighting to stop the increased pace in construction of the fence by lobbying Congress and speaking out on the issue.

“I am one of a dozen scientists ready to lay our bodies down in front of tractors,” Healy Hamilton, director of the Center for Biodiversity Research and Information at the California Academy of Sciences, told the Washington Post on April 20.

The border fence threatens people, too. Hundreds of people die making this crossing — many from exposure and dehydration.

The deadline to finish the fence is December 31, just before President Bush leaves office.