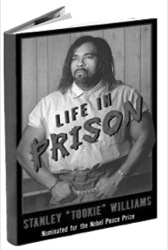 As a teen, Stanley “Tookie” Williams thought prison was glamorous. He joined a notorious gang in Los Angeles called the Crips, and eventually became the gang’s leader. Convicted of killing four people and sent to prison, Tookie was sentenced to death. While held in prison, Tookie decided to reach out to kids who are at risk of following in his footsteps, show them that there is nothing glamorous about prison, and urge them to make better life choices than he had.

With help from activist/journalist Barbara Becnel, Tookie wrote Life in Prison to show young readers that life behind bars is hellish. In the book, Tookie describes his day-to-day activities, and the conditions he portrays range from annoying to downright dangerous.

Tookie describes the harsh rules; loss of privacy and personal privileges; fear, distrust, and paranoia; unending violence and sexual abuse; unbearable odors and noise; and homesickness and loneliness – not to mention the tendency to go stir-crazy in confinement! He challenges kids to spend ten hours alone in a bathroom at home so they may begin to understand how it feels to live in captivity. After each chapter, the book invites kids to think about what bothers them, and to compare these gripes to that of a prisoner.

Royalties (money authors earn) from sales of this book are donated to the International Street Peace Network.