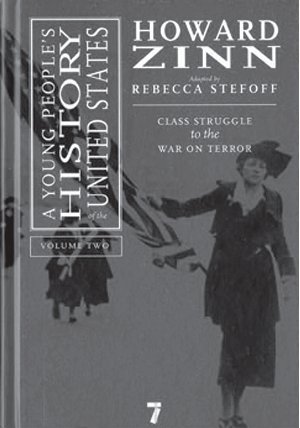 To truly understand what the United States is about you need to look at the perspectives of everyone involved. The two-volume collection A Young People’s History of the United States, adapted by Rebecca Stefoff from the classic radical history book by Howard Zinn, provides students with a critical view of U.S. history in an easy-to-understand format.

The book presents pictures, primary sources and a glossary to help paint a vivid picture of often ignored events.

Volume One begins by looking at the arrival of Christopher Columbus from the point of view of the Arawak Indians. It leads the reader through the 17th, 18th and 19th centuries. The book focuses on the many revolutions and wars that led to the independence of the United States. The book also summarizes the role of women and African Americans during this time period, as well as the relationships between the United States and other countries like Mexico.

Volume Two focuses mainly on the 20th century but also goes into the present-day war on terrorism. It starts by looking at labor and class struggles, while also looking at World War I and the Great Depression. In this volume, the reader is taken through some of the biggest social upheavals in U.S. history, like the civil rights movement and the war in Vietnam.

Throughout this two-volume collection, readers are presented critical views of war, racism and economic injustices, and are asked to consider why these events happened the way they did and what could have been done differently. The book provides readers with new information and interesting accounts of rarely told events in U.S. history, and demonstrates the importance of considering others’ perspectives.

1 thought on “Book Review: ‘A Young People’s History of the United States’”