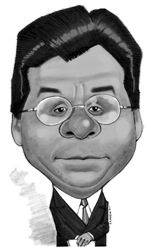 Attorney General Alberto Gonzales resigned in late August after months of people calling for him to leave office. The attorney general is the top law enforcement officer in the United States and head of the Justice Department.

Gonzales was in the middle of several scandals and investigations including the firing of nine U.S. attorneys and secret government spying on U.S. citizens. Gonzales is also known for approving U.S. soldiers’ use of torture against prisoners in Iraq and for supporting the controversial U.S. detention center in Guantánamo Bay, Cuba. He has been a legal adviser and friend to President Bush for a long time.

While many were happy that Gonzales resigned, civil and human rights advocates showed concern that the policies Gonzales started and supported still exist. Michael Ratner, president of the Center for Constitutional Rights, said, “Until we get rid of the entire cabal [group], which includes Bush and Cheney, that has engaged in torture, offshore prisons such as Guantánamo, violations of the Geneva Conventions and warrantless wiretapping, there is little to celebrate in Gonzales’ resignation.”

President Bush named Solicitor Paul Clement to be the temporary Attorney General until a new attorney general is selected and confirmed by the U.S. Senate.