Army Officer Faces Trial for Refusing to Go to Iraq 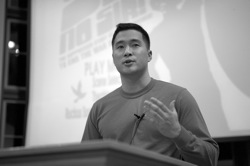 Lt. Watada speaks at Pacific Lutheran University. He is the first commissioned officer to refuse to go to Iraq. Photo: Jordan Hartman/thanyoult.org

Lieutenant Ehren Watada is the first U.S. Army commissioned officer to refuse an order to go to Iraq and to publicly speak out against the war. “The Iraqi war is not legal according to domestic and international law,” he said. A commissioned officer is a soldier who has a university degree and has command over a unit.

Lt. Watada was court-martialed and faced several years in prison because of his stand. A court-martial is a military court (made up of members of the military) that tries and decides punishment for soldiers.

Watada is charged with conduct unbecoming an officer, missing movement to Iraq, and contempt toward the President. Military personnel are not allowed to speak about their political views. But Lt. Watada felt he had to speak out against the Iraq war.

“Only following orders is never an excuse. To stop an illegal and unjust war, soldiers and service members can choose to stop fighting it,” he said.

Lt. Watada’s court-martial began on February 5 at Fort Lewis in Washington State. But on the third day the judge declared a mistrial over a document that Lt. Watada signed admitting to statements he had made. The new trial will begin on March 19. His defense lawyer objected to the mistrial and said a second trial would amount to double jeopardy, or more than one prosecution for the same alleged crime.

Many well-known people have voiced their support of Lt. Watada including actors, artists and U.S. Reps. Mike Honda and Dennis Kucinich.

You can learn more at www.thankyoult.org.