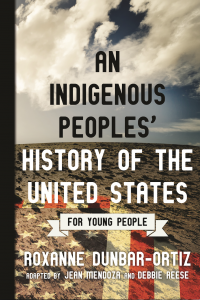 Kids aren’t always being taught the truth about Native American history, and historian Roxanne Dunbar-Ortiz wants this to change, so she encourages them to learn about history from resources produced by Native Americans and other communities of color who are often either misrepresented in textbooks or left out altogether.

In September of this year, Dunbar-Ortiz had a book launch at The People’s Forum in New York City which I attended. Her new book, An Indigenous Peoples’ History of the United States for Young People, is an adaption of her previous book by the same name.

As Dunbar-Ortiz writes in her introduction, like most people, “Americans want to think well of themselves, their ancestors, their history, and what they and their leaders do.” But this can leave out many important aspects of what happened in this country, especially the difficult parts of our past. If we don’t look at the full story, it doesn’t give us an accurate understanding of why things are the way they are today, as well as the diverse stories of who indigenous people are.

Dunbar-Ortiz grew up in rural Oklahoma. She then taught the Native American Studies Program at California State University, Hayward, and has written many books on the subject. She is a daughter of a part-Native American mother, and her father was a tenant farmer (a farmer who farms on rented land).

In her book, Dunbar-Ortiz shows many aspects of Native American history that are often left out of children’s history books. For example, she writes about how Native American children were sent to boarding schools run by missionaries.

This was part of the Indian Civilization Act, which suggested that Native Americans were “savage,” less than human, and needed to become white or what they called “civilized.”

A few decades later, during President Grant’s administration, the 18th president of the United States, the government spent $100,000 to build boarding schools hundreds of miles away from their homes. The government thought that children would forget their old culture and their beliefs. They were not allowed to visit their family because they might remember their old ways.

Children were forced to have their hair cut, taking away their long hair— an important symbol of their culture. They also had to change their names to traditional English names. If the kids didn’t change their names, teachers wouldn’t call on them in class.

The children were made to feel that it was criminal to be Indian/Native American. As Dunbar-Ortiz points out, “they could be beaten or physically punished for speaking their own languages and practicing their own traditions.” They weren’t allowed to participate in their spiritual practices because the government wanted to “Christianize” them.

This was a very traumatic experience, and that trauma is still being felt today by the descendants of those children.

The book also talks about the many resistance movements and actions by indigenous Americans fighting for their rights and freedoms. For example, the American Indian Religious Freedom Act was passed August 11, 1978, so that Native Americans could participate in their spiritual rituals once again. Before that, many aspects of Native American religions and sacred ceremonies were against the law.

In spite of all the actions over the last 500 years by European colonizers to try to eradicate  indigenous peoples and take over their land and resources, they have survived. As Dunbar-Ortiz writes, “[T]he presence of nearly five hundred federally recognized nations is evidence of the successes Native people have fought to protect their nations, their homelands and their families.”

Descendants –  A person that is descended from a particular ancestor. For example, grandchildren are descendants of their parents and grandparents.