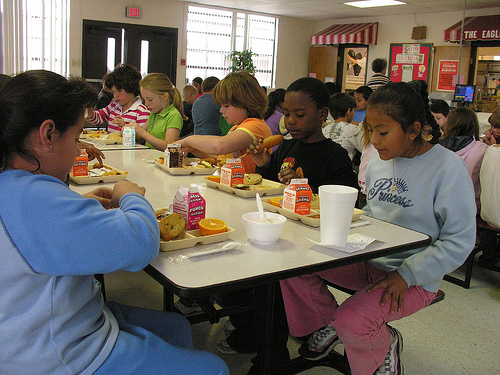 Most school lunches are too high in fat and cholesterol, according to the Physician’s Committee on Responsible Medicine, but activists are working to get more nutritious foods into the schools.

A report released last October from the Trust for America’s Health found that just one in ten students get the right amount of fruits, grains and vegetables in their school lunches. Instead, typical meals include salty, fatty foods like meat pizza, hamburgers, hot dogs and chicken nuggets. Recent studies have shown that diets high in saturated fat and cholesterol can lead to obesity.

Alex Poquette, a seventh-grader at Booker T. Washington school in New York City, does not like the school lunch. “There’s not much variety—chicken fingers, mozzerella sticks, greasy chicken, hamburger and pizza are repeated over and over again.” Miriam Entin-Bell, third-grader at the Brooklyn New School, also avoids school lunches. “I don’t normally eat the school lunch because it has too much grease.”

72% That’s the percentage of the government-provided (USDA) school lunch food that is meat and dairy. 25% is fruits and vegetables.