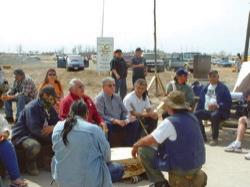 Six Nations people gather around a drum traditionally used in large gatherings. Six Nations is made up of six tribes in Canada and the United States. PHOTO: TURTLE ISLAND NATIVE NETWORK

A year ago kids and adults from the Six Nations (an organization of six tribes native to North America) near the town of Caledonia in Ontario, Canada, climbed over a fence and set up tents on a piece of land that was stolen from their people hundreds of years ago. Six Nations people have started living again on this land.

The land that the people of Six Nations are reclaiming represents a small piece of a large tract that was given to them by the British government in a treaty in 1784. The treaty guaranteed that the Canadian government could not develop or build on that land without permission from Six Nations people. But the government has found different ways of pushing Six Nations people to give up pieces of this land. A company called Henco bought one of those pieces in 1992.

Many people questioned whether the sale of the land to Henco was legal. The dispute delayed construction of Henco’s luxury homes until 2005. When construction began, Six Nations people blocked the construction and pushed the tractors out. Many people in Canada and the U.S. have supported their actions.

However, Six Nations also faced opposition. In April 2006 the Ontario Provincial Police raided the site and arrested sixteen people, some of whom were teenagers. Since then, the people of Six Nations have been in negotiations with the Canadian government over who has the right to be on this land.

The people of Six Nations want the Canadian government to respect their rights to the land. They also want to plant and live on it. The developers had cut down the trees to build houses, but when Six Nations people arrived they planted seeds and dug ponds for the snapping turtles and fish. Now, instead of suburban homes, you can see swaying reeds and animals rebuilding their homes. 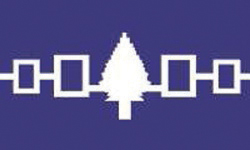 WHAT IS SIX NATIONS?

Six Nations is an organization of native nations or tribes in the Iroquois language family. They call themselves the Haudenosaunee (ho-dee-no-SO-nee), meaning “People Building a Long House.” The Six Nations are the Mohawk, Cayuga, Oneida, Onondaga, Seneca and Tuscarora tribes.

In the U.S., they live in upstate New York and Pennsylvania. In Canada, they live in Ontario and Quebec. Six Nations has practiced a participatory democracy (meaning everyone takes part) for over 800 years. This form
of government inspired the American Constitution.

Sometimes, when the Canadian and United States governments interfere with native lands it can be a disaster for the environment. Can you imagine if someone came into your house and started mining for uranium, drilling for oil, cutting down your trees or dumping waste in your backyard?

STRUGGLES
According to the Canadian Broadcasting Company, native children are the poorest in Canada. In the U.S., unemployment and school dropout rates for Native Americans are among the highest in the nation. Native people have been organizing to have their voices heard for centuries. In the United States there are many politically active native groups. There are even native groups just for youth. National Indian Youth Council: www.niyc-alb.org Native Youth Movement: freewebs.com/mnnym

HOW YOU CAN LEARN MORE

There may be a Native American reservation or museum in your area. John Fadden is a Mohawk who founded the Six Nations Indian Museum in northern New York State. John was born on the Akwesasne (a-kwa-SAS-nay) reservation, a territory that spans both the U.S. and Canada. He is an artist and teacher. He says the reservation today is “like a rural community. People have jobs just like in any other rural community.”

“Most kids east of the Mississippi don’t know Indians are here,” John told IndyKids. “If they look at old movies, they see Indians riding horses circling covered wagons. When they study Indians, they learn about the [kind of] house we used to live in. There is little as to what we’re doing today.”

John says there’s a lot kids can do to learn about Native Americans. “Go to places where Indians gather and speak with them. Read books.”

Millions of native people inhabited North America thousands of years before the Europeans arrived. How did the Europeans colonize the land and push the native people out? The majority of native people, over 95 percent in some areas, died of European diseases. Others were massacred by the colonizers in what many historians call genocide (deliberate killing of an entire group of people). 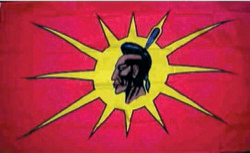 Today Native Americans live in every state and province in the United States and Canada. The U.S. government recognizes 562 different tribes, and even more are recognized locally.

4.3 million people in the United States are estimated to be Native American (1.4% of the population)

1.3 million people in Canada are of aboriginal ancestry (4.4% of the population)

381,000 people in the United States speak a Native American language

538,300 Native Americans in the United States live on reservations

Aboriginal (a-bor-I-ji-nal): Having existed in a region from the beginning

First Nations: The term used in Canada for Native Americans

Indigenous (in-DI-gen-us) people: People who are native to the land where they live

Reservation: A piece of land set aside by the United States or Canadian government for native people who have been pushed off of their own land

Treaty: An agreement between nations