It was a year of scandals, a worldwide financial crisis and the hope that a new U.S. president might be able to turn things around. Here’s a look back at some of the major events.

Economic indicators around the world showed a worsening economy. The United States entered a recession (a long period of slow economic activity). Millions of people have lost their job or home during the current recession. President Bush pushed through a $150 billion plan to give $600 back to each U.S. taxpayer in an effort to boost the economy.

The ExxonMobil oil company announced a $40.6 billion profit for 2007, the largest profit for a corporation in history. 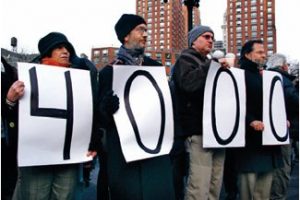 March 19 was the five-year anniversary of the war in Iraq. On March 23, four U.S. soldiers were killed in Baghdad, the capital of Iraq. These four deaths brought the total number of U.S. soldiers killed in Iraq to more than 4,000. The number of Iraqis who have died because of the war is estimated to be as high as one million.

Governor Eliot Spitzer resigned after The New York Times reported that he was a client of an expensive prostitute (a person who engages in sex for money). As a result, Lieutenant Governor David Paterson became the new governor. He is New York’s first African-American governor and first blind chief executive in the country.

The rising cost of food threatened much of the world’s people with hunger and led to food riots across the globe. Some causes of the food crisis included rising oil prices affecting the cost of growing and transporting food, harvest failures, drought, conflict and a global economic recession. More than 969 million people in the world live on less than $1 a day, according to the International Food Policy Research Institute (IFPRI), making it difficult for people to buy food.

Oil prices reached a new record of $147 a barrel, and prices for drivers filling up their cars’ gas tanks reached above $4 a gallon. 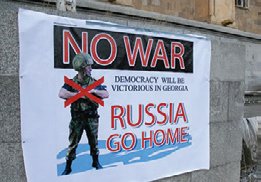 After years of political tension, a war broke out between the oil-rich country of Georgia and its breakaway provinces known as South Ossetia and Abkhazia. The war lasted for about one week. Throughout the war, the South Ossetian and Abkhazian forces were largely supported by the Russian military. Georgia’s military is backed by the U.S. government.

The Democratic and Republican parties each held a national convention to nominate their candidate for president. The Democrats nominated Barack Obama, and the Republicans nominated John McCain. While party members made speeches and celebrated, thousands of people gathered outside to protest what they saw as a broken political system.

Senator Ted Stevens was found guilty of violating ethics laws for not reporting thousands of dollars in gifts he received from an oil company businessman. Stevens ran for re-election in November but lost.

October 7 marked the seven-year anniversary of the U.S. war in Afghanistan. Some military analysts claimed that it could be at least another four years before the war is over, and President Obama has pledged to put many more U.S. troops there.

Several major banks nearly closed down. The U.S. government stepped in and approved giving $700 billion to the banks to keep them from closing. Thousands of people protested on Wall Street and around the country to oppose the bailout.November

Barack Obama was elected the United States’ first African-American president. Across the country, the Democratic Party’s candidates won seats in both the Senate and House of Representatives, giving the Democrats a strong advantage over the Republicans. 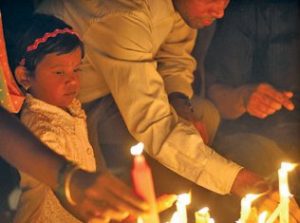 A series of attacks killed at least 173 people in Mumbai, the largest city in India. It is widely believed that the attackers were members of a militant organization based in Pakistan.

Climate scientists reported that 2008 was the coldest year in the past decade. Ice storms in the Northeast in mid-December devastated communities by causing power outages and damaging homes. But even this chilly weather does not contradict long-term global warming trends. According to the UK-based Climate Research Unit of the University of East Anglia, global temperatures have increased by almost a full degree Celsius since 1908, making 2008 one of the hottest years on record.

Governor Rod Blagojevich was arrested and charged with corruption, including trying to sell outgoing Senator Obama’s seat. Blagojevich said he is innocent and has refused to resign.