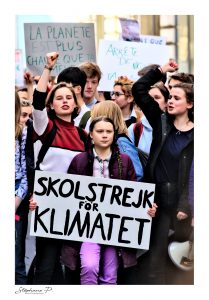 Outraged by the lack of government action against climate change, in August 2018, Swedish schoolgirl Greta Thunberg decided to take action herself. At the time she was 15 years old, and every Friday she protested outside the Swedish parliament with her sign and flyers outlining the science on climate change.

Soon her protest grew, and now millions of students across the world have joined her in #FridaysForFuture climate strikes.

Every year, news magazine Time features a person, a group, an idea or an object that “for better or for worse … has done the most to influence the events of the year.” Thunberg is the youngest person ever to receive this award.

“Wow, this is unbelievable!” she tweeted. “I share this great honour with everyone in the #FridaysForFuture movement and climate activists everywhere,”

Thunberg addressed the COP25 climate conference in Madrid this week saying, “I am telling you there is hope. I have seen it, but it does not come from governments or corporations. It comes from the people.”