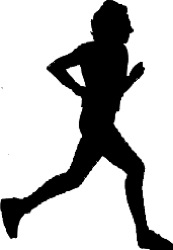 Each fall New York City celebrates the NYC marathon, which, with over 37,000 runners, is the largest marathon in the world.

The route covers 26.2 miles across the city. Why is a footrace of this distance called a marathon? According to legend, in ancient Greece a soldier ran this distance from the city of Marathon to Athens to announce that the Persians had been defeated in the Battle of Marathon.

Although finishing a marathon is hard, with time and a lot of hard work almost anyone can complete one. According to ING, the main marathon sponsor, the oldest person to finish was an 88-year-old man.

People who need wheelchairs or hand cycles can compete in special categories. The winning wheelchair cyclist and hand cyclists finish in an hour and a half, and the fastest runner completes the race in about 2 hours and 10 minutes.

While most runners need more time, all who cross the finish line are winners.